To enrich the students’ cultural background, helping them become more aware of the wealth of our heritage.

Various cultural outings were organized throughout this scholastic year.Our Year 1 and 2 pupils visited Mgarr Harour, the Ġgantija temples, Dwejra, Karmni Grima’s dwelling, a farm in Sannat and Ta’ Dbieġi Crafts village. They also had a trekking session in the valley of Marsalforn.  Year 3 also visited Ta’ Dbieġi and Dwejra, the saltpans at Xwejni and the Malta National Aquarium where they saw different types of fish and learnt about their habitat. 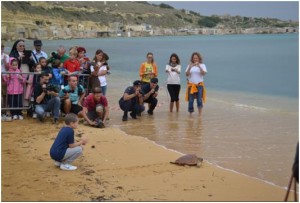 ‘X’hemm il-ġnien’.  They were given a booklet with details about this garden as well as other activities they had to do, mainly related to science. In November

they were also invited to watch the school’s adopted turtle being released  back in its natural habitat. In fact these loggerhead turtles were returned to their natural environment  following months spent at the Turtle Rehabilitation Unit at Forti San Luċjan in Marsaxlokk, where they were cared for by aquaculture officer Charles Sammut, veterinarian Anthony Gruppetta and volunteers from Nature Trust (Malta).

Outings for our Year 5 students included visits to the Cittadella, Ġgantija Temples, the Pembroke Reverse Osmosis Plant (as part of the Catch the Drop campaign) and Birgufest.

They were also invited to take part in an activity held in the valley of Marsalforn where they were able to admire the natural beauty of the place.  They were given information about the trees and plants growing there and participated in various experiments related to water and soil.

Cultural activities for our Year 6 class included a Hands on Farming at the the Government Experimental Farm in Xewkija for an interesting half day experience which brought  them closer to nature. Students participated in a short lecture, a visit round the farm and a hands-on experience that saw them planting trees which they were then given to take home.

They visited the Birgufest, the Reverse Osmosis Plant at Pembroke and the Ġgantija Temples where they did the Social Studies fieldwork.  They also participated in an activity entitled ‘X’hemm il-Mellieħa’.  The aim of this event was to engage students in hands on mathematical and scientific activities promoting a pr

oblem-solving approach, outside the classroom in different areas around Mellieħa.  This event was organized by the Department of Curriculum Management and supported by the Mellieħa Local Council.

All teachers used the interactive whiteboard extensively as they found this tool very useful and most effective in making a lesson enjoyable to all.  It also stimulated the children’s imagination. Our Year 5 students also made use of the Activotes during particular lessons. 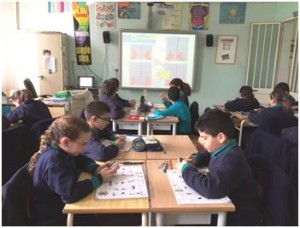 Music also played an integral part in each classroom.  The whole school had a singing lesson every Monday.  Besides, many of our students were given the opportunity to bring their instrument and perform in front of their classmates.  Our junior pupils learnt about different kinds of music and instruments. 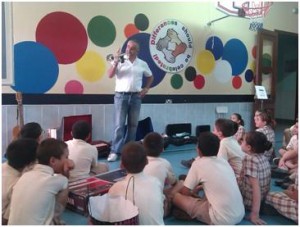 o Michel Refalo who was invited to speak to the students in order to instill in them an appreciation for different types of music and understand the value and merit of each style.  Mr Refalo  showed the students various wind and string instruments and explained low low and high pitched sounds could be obtained.

The children were also able to show their creativity through the work that they did in class – their writings, drawings, crafts etc. These were displayed in their classrooms and made the students extremely proud of themselves.  The Year 2 students also did a puppet show and wrote their own script!