The new students’ council worked very well.  The workload was split up between all the members with each member being assigned  a specific role.

Our Year 5 teacher asked her students to send her an email expressing what they like about our school and pinpointing anything that they may wish to have.  Thus each student had a chance to express himself/herself in order to further improve our school environment.
Our school entered in various competitions throughout the year with most projects being related to Eko Skola.  During the European Week for Waste Reduction, our school organized a whole week of activities aimed at reducing waste including the wastage of food.  A cooking de

monstration using leftovers was organized at the Villa Rundle.  Parents were invited to see for themselves and learn about ways of how to use leftover food effectively.  Projects using recycled material were made as well as charts related to Food Waste.  An exhibition was set up at the Ministry for Gozo and this was open to the general public.  Second-hand books were donated to the Cathedral Public Library as well as the Munxar Library.  Second-hand toys and books were also donated to the Gozo General Hospital to be used by young patients in the children’s ward.

For the Best Practice for Sustainable Development Project our school organized a flashmob which was performed in St Francis School in front of a large crowd.  This same flashmob was later repeated at the Gozo Bishop’s Conservatory Primary School as well as in St George’s Square.  The aim of this project was to create awareness about Fairtrade.  In fact the school printed brochureswith details about Fairtrade and during the flashmobs, information booths were set up so that our senior students were able to give details to the general public.  The flashmobs we 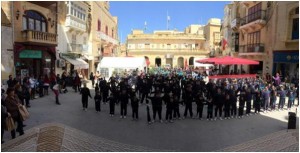 re filmed and aired on the TV programme ‘Għawdex Illum’.  We were awarded third prize for this project and our Head of School, Sr Francesca Abela and our assistant head, Ms Monique Camilleri, travelled to Germany to be presented with the

Our school also made a video related to Sustainability using a song provided by Ekoskola and used by all participants as a backing track of this video.  Each participating school had to create its own version of sustainability and come up with original ideas.  The video was downloaded on You Tube and people were asked to like it in order to gain points.

The Batterina Campaign continued once again this year.  A large amount of batteries were collected and the amount collected thus far looks very promising.  In fact up until the middle of April, our school had already collected over 120 kilos of batteries.

Class wardens continue to look after the school’s environment and ensure that no litter is left lying around anywhere on the school’s grounds.