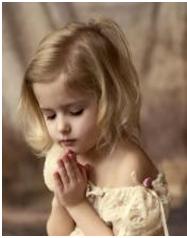 During the scholastic year, all students were encourage 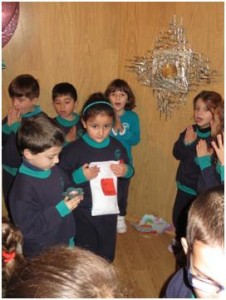 d to visit the chapel as often as they could and many went in to say a prayer first thing in the morning, as soon as they entered school.

In our Year 1 class the students wrote a prayer and took turns to recite it when they visited the chapel.  The teacher narrated a bible story every Friday and this was followed by a discussion, a quiz, a handout or role play.  The teacher also dedicated some time during the week to speak about Pope Francis and showed them pictures about his life and his work with different people.

Every month our Year 2 pupils and their teacher also visited the chapel where they sang hymns and recited some prayers.  The teacher would often teach her class various prayers by using flashcards or a Powerpoint.  Every week a bible story was shown to the class either by means of a powerpoint or on You Tube.  Every day at noon, the whole class stopped to recite the Angelus and the children got so accustomed to this that they often reminded the teacher when it was time to say this prayer.  Stories about Madre Margherita and Pope Francis were narrated to the children or a clip was shown on the interactive whiteboard.

Our Year 3 teacher would often encourage her students to visit the chapel as soon as they did the locker first thing in the morning.  During the scholastic year religion lessons were planned by the students themselves and these would include handouts with crosswords or colour-ins.  Very often they also prepared a special prayer which would be placed in a corner of the classroom and recited throughout that week.  Whenever they prepared something for the morning assembly, these students, aided by their teacher, always related it to that week’s gospel.  Episodes of Madre Margherita’s life as well as clips about  Pope Francis were also shown to the class and were followed by a discussion.    Every Thursday, when visiting the Holy Eucharist together with the Year 2 pupils, a special prayer was prepared and both classes recited it together.

A prayer corner was set up in our Year 4 class.  Here the students would find various flashcards with different prayers that were shared in class.  Every Friday a student would prepare a lesson related to Bible teachings.  This was usually followed up by a handout, a crossword or colour-in.  The teacher used clips on You Tube to show the students episodes from Pope Francis’ life.  Afterwards the class would discuss what they had just seen.

Our Year 5 students wrote prayers and displayed them on one of the classroom’s boards.  They took some of these prayers when visiting the chapel on Thursdays.  The teacher involved the students during the Religion lesson. Students would very often prepare their own lesson with very well prepared handouts that included questions or crosswords on the topic chosen.  Some students also prepared Powerpoint presentations in order to make their lesson more interesting.  Our Year 5 teacher would often use a facebook page entitled ‘Paġna ta’ talb’ from which various prayers were derived. The teacher showed her class episodes from the 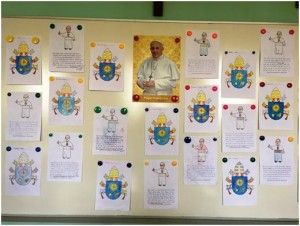 life of Pope Francis.  The class would often discuss how this pope differs from previous popes in the way he lives, by the way he acts and what he preaches.  All students prepared a drawing related to Pope Francis and all of them were displayed on the classroom’s board.

A small mailbox was set up in a corner of our Year 6 class.  In it the students placed their own prayers which were used when visiting the chapel.  These prayers related to different topics such as suffering, forgiveness, thanks etc.  The students also learnt the Five Finger Prayer of Pope Francis.  Every Friday, the teacher showed them a powerpoint presentation or a clip on You Tube related to the Religion topic being covered at the time.

Our Literacy teacher, Ms Vicky, used handouts to teach the students about the parables and miracles of Jesus and how they can relate them to their everyday life. She showed them clips about Pope Francis, his visit to Israel and episodes from his life.  The class discussed the good qualities of this Pope – his humbleness, care, understanding etc. 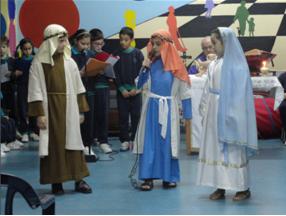